Source: The Centre for Biblical Formation

The Notre Dame de Sion Centre for Biblical Formation in Jerusalem offers programs of study centred on the Word of God: drawing on Jewish sources and tradition; visiting sites related to the biblical text; reflecting on relevant Church Documents; and engaging with the peoples of the Land.

Participants at the Centre have the unique opportunity to study, contemplate and pray with the biblical text in the Land so central to its composition. Participants are part of an international, ecumenical community exposed to the best of contemporary scholarship. Living in this bustling and cosmopolitan city, central to Jews, Christians and Muslims you will begin to appreciate the religious, cultural and political complexity that is Jerusalem.

the Bible . the People . the Land

Study time focused on portions of the Book of Acts and on selected texts of St. Paul’s letters to root us in our Christian faith. 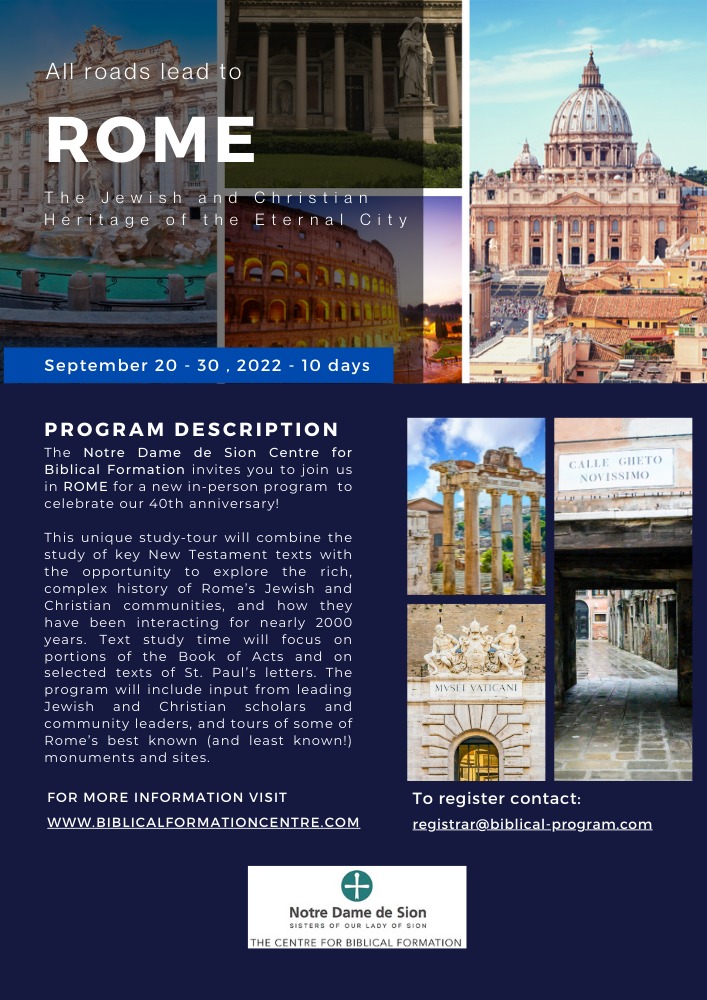 The Notre Dame de Sion Centre for Biblical Formation in Jerusalem invites you to join us for a new in-person course to celebrate our 40th anniversary!

This unique study-tour will combine intensive study of key New Testament texts with the opportunity to explore the rich, complex history of Rome’s Jewish and Christian communities, and how they have been interacting for nearly 2000 years.

There will be study time focused on portions of the Book of Acts and on selected texts of St. Paul’s letters to root us in our Christian faith.

It will include input from leading Jewish and Christian scholars and community leaders, and guided tours of some of Rome’s best known(and least known!) monuments and sites, including:

● The Vatican, including St. Peter’s Basilica, the Vatican Necropolis (Scavi), Vatican Museums and the Sistine Chapel
● The area of the former Jewish Ghetto, Rome’s main synagogue and the museum of Roman Jewish history and culture
● The historic Trastevere neighbourhood of Rome (the original home to Rome’s Jewish community)
● Some of Rome’s most ancient and fascinating churches (San Clemente, Santa Maria Maggiore, St. Paul’s-Outside-the-Walls, San Gregorio della Divina Pieta (the “Church of the Forced Sermons”)
● The Roman Forum … and much more!

This study tour will help participants to appreciate Jewish-Christian relations in Rome (both ancient and modern), as well as the crucial role played by St. Paul in the early development of Christianity (especially in Rome). It will also allow opportunities for individual exploration of the Eternal City, its monuments, neighbourhoods, and cuisine.