We are delighted to announce the publication of a special issue of Contemporary Jewry, devoted to Judaism and Hinduism and different dimensions of their encounter. It follows on the heels of issue 40,1 of Contemporary Jewry, previously featured in our Wisdom Newsletter. Both issues were edited by Alon Goshen-Gottstein at the kind invitation of Harriet Hartman. The earlier issue was devoted to the relations between Judaism and world religions. Now, a special issue of the journal has appeared, devoted to one particular relationship, that of Judaism and Hinduism. 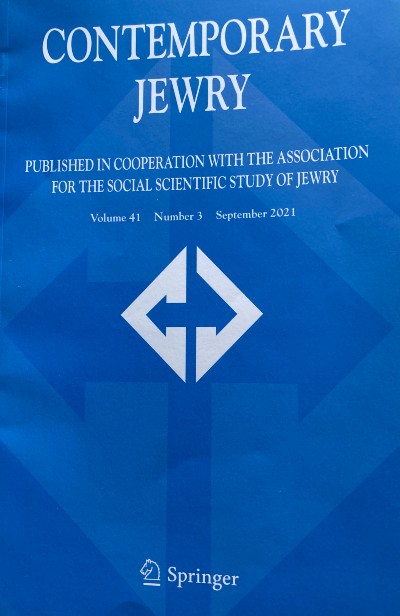 The issue of recognition of another religion, its validation and the ensuing possibilities for learning, receiving and growing through the encounter with that religion are the focus of the twin volumes on Judaism and Hinduism I have written: The Jewish Encounter with Hinduism: Wisdom, Spirituality, Identity and Same God, Other god: Judaism, Hinduism and the Problem of Idolatry. Almost all the theoretical challenges and possibilities that arise in the context of a Jewish view of and encounter with another religion come to expression in the study of the Jewish encounter with and a possible Jewish view of Hinduism. The challenge of legitimation occurs at the most fundamental level - is it a legitimate religion or does it constitute Avoda Zara, idolatry. The possibilities for mutual growth and inspiration are studied through the many angles of the contemporary and unprecedented encounter where a massive number of young Israelis follow in the footsteps of American and European Jewish youth decades earlier in exploring the spiritual riches of India. Once again, we encounter the two poles of identity and spirituality. Jewish identity is threatened by encounter with another religion at the same time as new spiritual openings arise. These come to light for practitioners, but even more significantly for Jewish thought and Jewish tradition, as it encounters a new and significant conversation partner, in the form of Hindu thought. In the same way that Judaism has grown throughout the centuries in its encounter with other traditions and civilizations, so too this new religious encounter opens up multiple possibilities for revisiting many lost parts of Jewish tradition and gaining fresh perspectives on fundamentals of a religious view of reality and of Judaism’s position in relation to world religions.

Hinduism and Judaism: An Overview
The paper offers a comprehensive historical and conceptual overview of Jewish-Hindu relations. It offers an encyclopedic overview of historical roots, theological differences, legal challenges and present-day relations. Special attention is given to the possibilities of how Jews can handle the claim that Hinduism is idolatrous and to its present-day consequences. Hindu-Jewish summits form the last chapter in the history of relations, and their declarations are analyzed as part of the overview. The paper concludes with a projection of areas for future development of the relationship.

[Lessons Learned: Personal Refections on How](storage/app/media/2022/05/ francis-x-clooney/2022-06-01-personal-reflection.pdf)
Christian‐Hindu Studies Can Illumine Jewish‐Hindu Studies This essay is the fruit of the author’s long experience in Hindu-Christian studies. The intent of it is to describe something of that learning, and to then extend it, by way of friendly suggestion, to ofer advice for readers engaged in Hindu-Jewish studies.

Confronting the Challenge of Idolatory: Response to Alon Goshen‐Gottstein, Same God, Other god
A critical analysis of some important issues raised by Goshen-Gottstein’s book. The author argues that the most fruitful avenue for a Jewish approach to Hinduism is by using the concept of shituf. This means that for Jews, all use of statues, images, and speaking about “gods” is forbidden. However, for non-Jews, this would remain a permitted form of worship as long as the various gods are seen as manifestations of the one true God.

The Study of ‘Hinduism’ and the Study of ‘Judaism’: A Personal Journey
Two religious traditions have informed my personal and academic life – Judaism and Hinduism. This is a reflection on their intersection over a period of more than 40 years. This article chronicles an academic journey from a reified religious universalism towards identifying a deep structural affinity between Judaism and Hinduism defined in contrast to other major differentially constructed religious traditions, then to a position of radical alterity that is potentially just as productive of a very different discussion among those interested in cross-traditional and interreligious deliberations. The wider context is that of the relationships, conceptual and analytical, between discernible religious traditions, or dimensions thereof.

Reflections on Judaism and Hinduism
This paper offers a comparative analysis of Hinduism and Judaism, largely based on references and quotes from the book The Jewish Encounter with Hinduism—Wisdom, Spirituality, Identity by Dr. Alon Goshen-Gottstein. It visits topics such as ethnicity, conversion, pluralism and universalism, tolerance and intolerance. The paper also questions the reasons of Jewish seekers of Hindu spirituality, doubting Dr. Goshen-Gottstein’s argument that this is due to a crisis in Judaism, but rather due to prevalence of left-brain thinking over right-brain thinking in Judaism. The paper concludes with a parable that relates to one finding a treasure hidden where one least expects to find it.