(CNN)Because SS soldiers used the Nożyk Synagogue as a warehouse and horse stable during World War II, it was the only major Jewish synagogue the Nazis did not destroy in Poland's capital city of Warsaw.

Now, it is once again a house of worship, led by the chief rabbi of Poland, Michael Schudrich.
He says it is unclear how many Jews are in Poland today. Before World War II, Poland had a robust Jewish community of about 3.5 million. The Nazis killed almost 90% of them, and many of those who survived and stayed in Poland stopped identifying as Jewish.
"They simply didn't tell. It was too painful. The survivors were too traumatized. They made a decision that it's no longer safe to be Jewish," said Schudrich. But Poland's tiny Jewish population diminished even further in 1968, when the communist government forced thousands to leave the country in an anti-Semitic purge. This dark chapter in Polish history stands in contrast to the generosity and compassion the country is showing Ukrainian refugees -- some of it a lesson learned, perhaps, from its own past.

"In March of 1968, there were rumblings in society against the government," Schudrich said.
Many in Poland rejected the communist party's tightening grip over the country.
"The government decided that the best way to deal with this social tension -- the social opposition to the government -- was by claiming ... it's all the Jews doing it," Schudrich said.
Scapegoating the Jews was a tried-and-true tactic used by leaders for millennia, and it worked just as the communists, engaged in an internal power struggle, had hoped it would. For this story, Dana Bash's team spoke with members of her extended family in Warsaw and New York.

In the late 1960s, protests raged not just on American college campuses but at Polish universities as well. While American students marched in protest of the Vietnam War, students in Warsaw demonstrated against censorship in their country. And the communist government did not like it.
After Israel's victory over its Arab neighbors in 1967's Six-Day War, Poland's communist party leader Władysław Gomułka spoke out against a "fifth column" of Polish Jews, in what became known as the "Zionist" speech -- evoking a wave of anti-Semitism.
The incendiary speech plays on a loop on a bank of televisions in an exhibit at the POLIN Museum of the History of Polish Jews in Warsaw. Joanna Fikus, who leads the exhibitions department at the museum, explained its significance to CNN.
"After this speech, this huge wave of anti-Semitic campaign began," she said, gesturing at the largest screen overhead.
Gomułka spoke about the threats to Poland, referencing "traitors."
"He never mentioned the word 'Jew,'" Fikus explained. "He didn't have to."
"You can imagine that people in their 40s or 50s who survived (the) Holocaust and remembered how it began," she said. "They felt (goose bumps), and they understood that they don't know how it might end, but they have been through something like this again."
The communist government went after "elites" on college campuses as well as so-called Zionists. 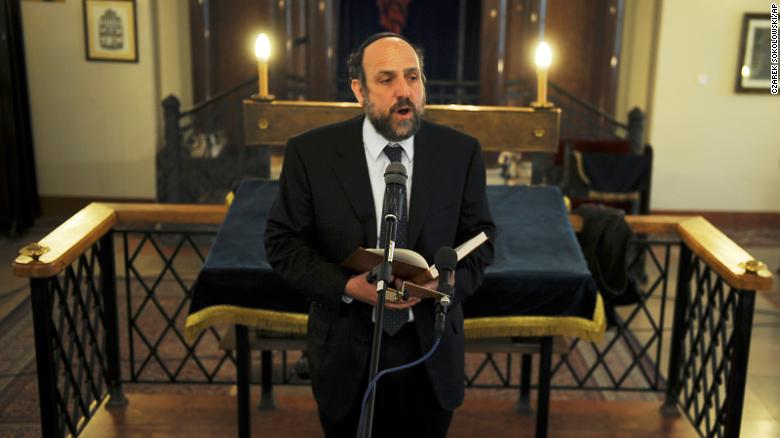 Michael Schudrich, the chief rabbi of Poland, speaks during a memorial service at the Nożyk Synagogue in Warsaw on May 18, 2008.

Konstanty Gebert was a Polish high school student in 1968 and described his story from that year as "typical," which is chilling considering how he tells it.
"When the anti-Semitic campaign started, we started losing friends fast," he recounted to CNN, standing in downtown Warsaw last month where he "got beaten up on the street for being a dirty Jew and then standing there, rubbing my face and wondering, 'What was that all about?'"
Gebert, who is now a prominent journalist in Poland, got expelled from high school for being of "Zionist extraction," he said.
His older sister left. Most of his friends left. His mother was "de-Zionized" from her job -- another anti-Semitic move cloaked in new language.
"We were a completely assimilated family. My father wasn't even Jewish. We never denied we (were) Jewish. It was that unimportant. I had friends who found out that they are Jewish only in '68 when the father would say, 'Well, son, you're old enough now to know that,' and here comes out the guilty secret. We didn't care," he recalled.
Gebert managed to stay in the country. Tens of thousands of others were not as lucky.
The communist government forced Jewish citizens to emigrate, said Fikus, who also serves on the board of the Jewish Historical Institute of Poland. "They were deprived of their citizenship. They were told that they have to leave their home," she explained, pointing to a display case featuring a $5 bill -- the only amount of money they were allowed to carry -- and a one-way document that resembled a passport. But it wasn't a passport -- it was a special document.
"It meant that you could only leave Poland, and never come back," she said. 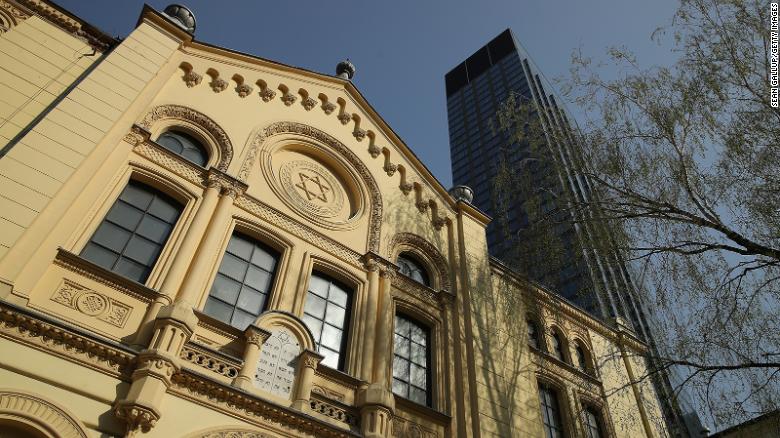 The Nożyk Synagogue, Warsaw's only surviving synagogue from before World War II, stands under a modern office building on April 12, 2018.

Bash's uncle, Alex Gelber, was one of some 13,000 Polish Jews who were given a one-way ticket out of his country.
He was 20 years old in 1968 and in medical school.
"It was very unpleasant because I was pulled out from this fairly protected environment to the situation in which I'm essentially, like, nobody," he recalled.
The Polish life he described before everything changed was not one of persecution, but relative privilege.
"We were young kids, and it was mostly partying, and having a good time. And actually, politics was really not on the horizon. And as far as I'm concerned, there is an issue of anti-Semitism that came up later. That, for myself, was essentially nonexistent. And so that was not an issue. Obviously, I knew that I was Jewish, and my friends knew that I was Jewish. But it was not a problem," Alex said.
His father, the late George Gelber, was a prominent doctor and professor in the western Polish city of Szczecin, where they moved after George survived World War II because he was helped and hidden from the Nazis by his Catholic professor and doctor in the community. He tended to children's medical needs, wrote academic papers and lived a relatively nice life considering they were behind the Iron Curtain.
"He was definitely well recognized as an excellent doctor," Alex said. But none of that mattered in March 1968 during the communist government's purge of Polish Jews.
"My father, personally, he was given a choice. They say, 'You can resign by yourself, or we will fire you.' Obviously, it made no difference. And so he said, 'No. I am not going to resign. You have to tell me that I am not worth being here,'" Alex recalled.
In the following days, Alex remembers a blur of packing and getting together with friends and family they thought they would never see again. "You had an official who would stand over you and would say, 'Well, you can take this item or you can take this piece of whatever, some possession, jewelry or something, and then you cannot take the other,'" he recalled, though he said his family was allowed to take a bit more than others because the mother of their customs official was one of his father's patients.
"There were a lot of scattered examples of humanity, but overall it was very unpleasant because you are a refugee," he said.
This uprooting came little more than 25 years after his parents barely survived the Nazis in Poland.
"They tried to build this semi-normal future, and it just didn't work well," Alex said.
For the large family on Alex's mother's non-Jewish side left behind in Poland, it was also traumatic.
Wojciech Zaremba, Alex's cousin, was only a boy in 1968, but he remembers it.
"It was unexpected. It was very, very rapid. And so, it was a kind of shock, but what was even worse after that, we lost contact. Because, remember, there was no internet; there was no ability to call. We were behind the Iron Curtain. We had no news, no messages. ... It was like a disappearance of this, in a very rapid way," he said.
To this day, he said he can't believe the Poles kicked out people like George Gelber, who spent his life tending to the health of the country, especially in Szczecin, which only became part of Poland after World War II.
"There were no established networks; the proper services, the proper care. ... He was un-replaceable, basically, but still, this was the most political reason for him to leave," said Zaremba. 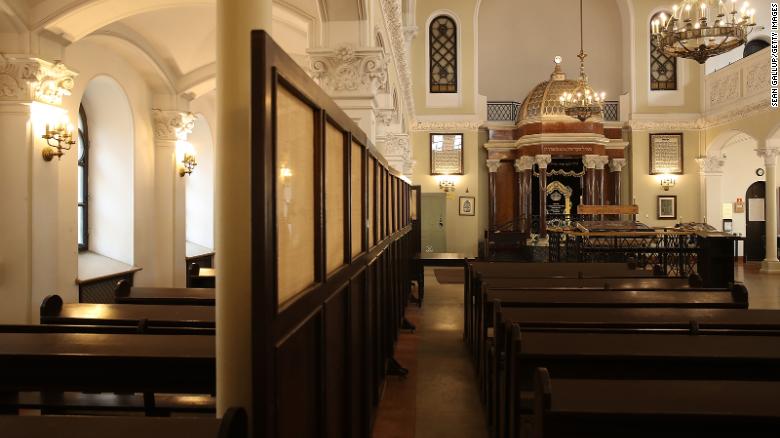 At left, the women's worship area in the Nożyk Synagogue in Warsaw as seen on April 12, 2018.

The plight of the refugee. Where do we go?

George and Anna Gelber made their way to New York in 1969 to stay with relatives and slowly build a new life.
Alex's sister, Renata Greenspan, had already finished medical school in Poland and also went to the United States. She joined the US Army, rose in rank to colonel and shattered glass ceilings as the first female director at the Armed Forces Institute of Pathology.
Alex finished medical school in Italy and then joined his parents in New York, which is where he met my aunt Dr. Linda Wolf in 1981, while both were working at Bellevue Hospital.
Alex's story has a happy ending, but the memory of being forced from his home, his country, his life, still lingers. "This passage abroad," he recalled, "leaves the mark that doesn't leave you."
Since Russian President Vladimir Putin invaded Ukraine in February, Poland has welcomed nearly 3 million Ukrainian refugees over its border. It's a remarkable display of compassion and humanity for a country that expelled people like my uncle less than 60 years ago.
Like the tens of thousands who were forced to leave Poland in 1968, Alex views today's conflict through the lens of a former refugee.
"It's uncannily similar," he said of the refugee crisis in Ukraine. "It's the same thing. It's this hate and (intolerance). And they drive people out, and people are desperate, and they don't know when will they come back?"
"No person who underwent that experience would be very much against immigration," he continued, "because that's how it should be done. When people are persecuted, they should be accepted in other places, in spite of all the things that can otherwise happen."
As Alex watches this new wave of refugees find shelter in a country that could not offer him the same, he is hopeful this is a lesson learned for Poland.
"They're ordinary people who opened their homes, and they let people move in -- so this is heartening. And that is, I guess, a source for hope."