Aish.com is the leading Jewish content website, with an average of 1,000,000+ monthly user sessions and 260,000 unique email subscribers.

Young Jews feel culturally Jewish – and that's the beginning and end of their Jewish identity.

The Pew Research Center’s 2021 Report on American Jewry was released last week and it tells one consistent story: the younger the generation, the less likely they'll be affiliated with Judaism, marry someone Jewish, attend synagogue, keep traditions or raise their own children as Jews.

Among young Jewish adults, the survey finds that “two sharply divergent expressions of Jewishness appear to be gaining ground — one involving religion deeply enmeshed in every aspect of life (ie the Orthodox), and the other involving little or no religion at all (ie the unaffiliated).”

The collective Jewish community in the United States – and Israel – address these worrying and ongoing numbers of assimilation with time, money, organizations, meetings, and programming. But according to the data, it isn’t fixing the problem.

The report states that 40% of Jewish adults under 30 do not identify their religion as Judaism. They identify themselves religiously as atheist, agnostic, or “nothing in particular,” but not Jewish. This is compared to 27% of all Jewish adults. 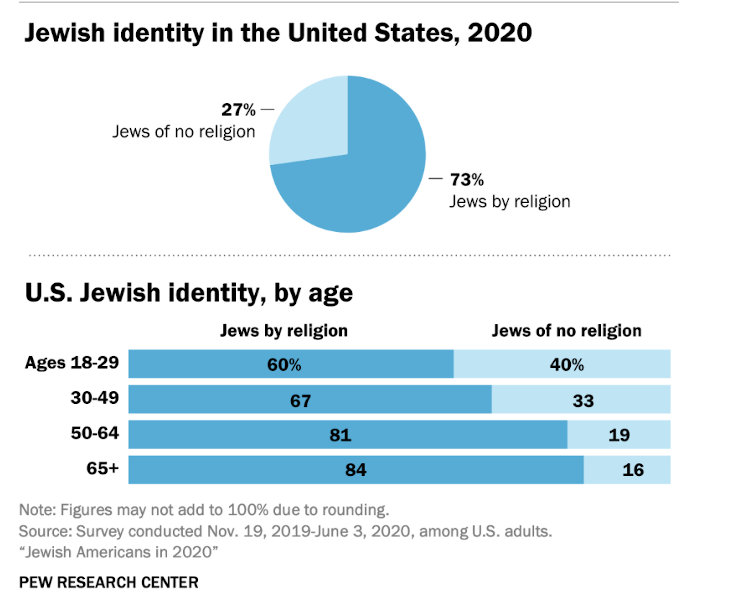 Of that 27% overall that identify as “Jews of no religion,” only 30% attended a Passover seder, and less than 1% went to synagogue once a month. Just 4% think it is important that their grandchildren be Jewish. Only at the two ends of the spectrum do we see the numbers go up.

There is and has been discussion for many years about lack of involvement, lack of interest. But how can we accept or reject, embrace or abandon something we know nothing about? Sadly, there’s a fundamental disconnect between the amount of Jewish culture/ media/ entertainment/ community activities available in the world and exposure to Jewish knowledge.

The Jewish community has spent the past two decades deeply concerned about Jewish assimilation in the United States, with Jewish leadership creating an astounding number of organizations, programs, leadership training, curricula, and trips to Israel – an investment with a staggering price tag. But one item has been largely missing: Judaism. There’s been a lack of willingness to dive into our texts and explore firsthand ancient Jewish wisdom anew. And the few creative initiatives that do exist simply aren't enough.

The emphasis has been primarily on Jewish culture, which is woefully inadequate to nurture continuity and serious engagement – not the relevant wisdom that has guided the Jewish people for millennia. The Pew data shows that the younger generation feel culturally Jewish – and that's the beginning and end of their Jewishness.

Can we instill Jewish pride and ignite curiosity without injecting religion or God into the mix? According to the current Pew study, the answer is clearly no. This disconnect is at the root of these stagnant numbers.

So how do we fix it?

How as a people do we use this critical data to innovate and adapt and respond accordingly to bring about the desired outcome, namely, the survival, growth, and improvement of the Jewish people?

The Pew study is an urgent wake-up call to bring Torah wisdom back into the conversation, to return to our texts and discover a Judaism that transcends mere cultural identity.

The answer is knowledge. Knowing who you are and what you come from. Understanding what Judaism has to say about the world, and what Torah contributes to the world of ideas and values. What makes Judaism unique, and why being – and staying Jewish – matters. Why Judaism not only a culture, but a religion that conveys compelling, timeless and meaningful values and ideas

Rabbi Noach Weinberg founded Aish 45 years ago. He lived his life with a passion to save every Jew from external threats he viewed as very real. When he founded Aish HaTorah in 1974, the threat of assimilation was apparent. Jews were leaving the fold not because they hated Judaism, but because there was a dearth of Jewish knowledge. You can't love what you don't know.

While reporting that "religion" is not important to the majority of younger Jews, the Pew study shows that 72% consider living a “moral and ethical life” essential to being Jewish, while 59% say it’s about working for justice and equality in society. In addition, 50% of Jews say they believe in "some higher power/ spiritual force," and 26% believe in the "God of the Bible.” This means that 3/4 of Jews connect to the core Jewish spiritual idea of a Higher Power bringing deep and meaningful purpose into our lives.

The study is an urgent wake-up call to bring Torah wisdom back into the conversation, to return to our texts and discover a Judaism that transcends mere cultural identity. This demands enormous creativity and innovative thinking. Our precious legacy has the power to re-energize an entire generation of young Jews. Let's get to work.